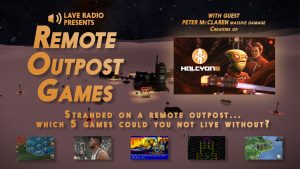 In this episode, hosts Christopher Jarvis and John Stabler talk to Peter McLaren, Creative Director of Massive Damage, to talk through his favourite games as well as own game: Halcyon 6. H6 was funded through Kickstarter and has recently had a massive update in the new “Lightspeed Edition.” Listen now and enjoy!