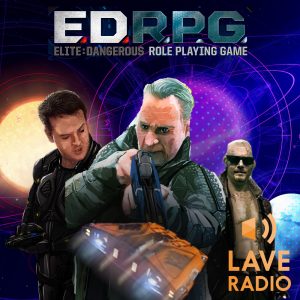 We’ve been playing the Elite Dangerous Roleplaying Game (EDRPG) and we’ve produced it as a podcast series, of which is this part number THREE! At LaveCon there will be a live RPG game which will be episode four of THIS ADVENTURE, so make sure you listen to the whole thing before this weekend, if you want to know what’s going on!

This podcast is a RPG game enhanced with music, sound effects and an all-round fiction treatment, plus some great rolepaying from the Lave Radio crew and excellent content planning by Oliver Hulme, our Game Master and Lead Writer of the Elite Dangerous RPG.

In episode three of INCIDENT AT BAIJANGU, Cmdrs Psykokow, Eid LeWeise, Thane and 2nd Tech Fozza have ascended to station control on a mining base overrun with enemies. They have the element of surprise, but a carelessly thrown grenade threatens the team!

Download the episode here and it’s available in all the usual RSS/iTunes-y places as well.