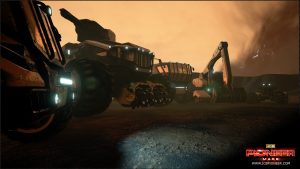 Once again I was working, so only had an hour on the Show Floor, but I was able to bump into Cmdr Slopey who made (the now deceased) Slopey’s Trade tool. He and I then went to the 65 Days of Static  (who produced the Music for No Man’s Sky) Developer session, which sadly I wasn’t able to record, although the session should be available to stream ‘soon’. After that we Visited JCB Pioneer Mars and I had a great interview with one of their producers Les Ellis. Aired 23 September 2016